Political Aesthetics highlights the complex and ambiguous connections of aesthetics with social, cultural and political experiences in contemporary societies. If today aesthetics seems a rather overused term, mixing a variety of historical realities and complex personal states of being, its relevance as a connecting agent between individual, state and society is stronger than ever.

The actual context of political and economic crisis generates new relations between official imposed aesthetics and the resistance and critiques they trigger. Considered beyond the poles of power and protest, the book examines how traditional or innovative artistic practices may acquire unexpected capacities of subversion. It nourishes the current debate around the new political stakes of aesthetics as an inviolable right of ordinary citizens, an essential element of empowerment and agency in a democratic every day.

It will be of interest to students and scholars of international relations, political culture and political aesthetics, as well as critical sociology and history. It will also be useful for some broad courses in media studies, cultural studies, and sociology.

Arundhati Virmani is an historian at the École des Hautes Études en Sciences Sociales, Centre Norbert Elias, Marseille. Her works deal with the social and political history of colonial and contemporary India, in particular the forms and mechanisms of social aggregation, symbols and rituals of national sentiment, places and objects of memory. 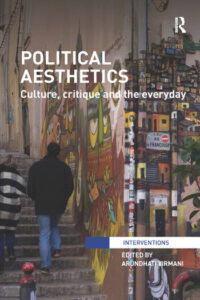