Despite a rich history of ethnographic research in Middle Eastern societies, the region is frequently portrayed as marginal to anthropology. The contributors to this volume reject this view and show how the Middle East is in fact vital to the discipline and how Middle Eastern anthropologists have developed theoretical and methodological tools that address and challenge the region’s political, ethical, and intellectual concerns. The contributors to this volume are students of Paul Dresch, an anthropologist known for his incisive work on Yemeni tribalism and customary law. As they expand upon his ideas and insights, these essays ask questions that have long preoccupied anthropologists, such as how do place, point of view, and style combine to create viable bodies of knowledge; how is scholarship shaped by the historical context in which it is located; and why have duration and form become so problematic in the study of Middle Eastern societies? Special attention is given to understanding local terms, contested knowledge claims, what remains unseen and unsaid in social life, and to cultural patterns and practices that persist over long stretches of time, seeming to predate and outlast events. Ranging from Morocco to India, these essays offer critical but sensitive approaches to cultural difference and the distinctiveness of the anthropological project in the Middle East.

Judith Scheele is Directrice d’études at the École des Hautes Études en Sciences Sociales in Paris. She has carried out research in Algeria, northern Mali, and Chad. She is author of Village Matters: Politics, Knowledge and Community in Kabylia and Smugglers and Saints of the Sahara: Regional Connectivity in the Twentieth Century.

Andrew Shryock is Arthur F. Thurnau Professor of Anthropology at the University of Michigan. He studies political culture in the Middle East, Arab and Muslim immigrants in North America, and new approaches to history writing. His recent books include Deep History: The Architecture of Past and Present, Islamophobia/Islamophilia: Beyond the Politics of Enemy and Friend, and From Hospitality to Grace: A Julian Pitt-Rivers Omnibus. 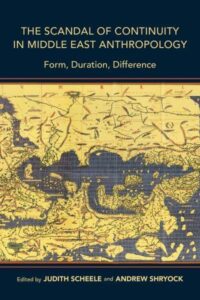