The Value of Disorder – Julien Brachet and Judith Scheele

Despite being central to the development of Saharan regional connectivity, northern Chad has been closed to researchers since the late 1960s and thus remains virtually unknown to scholarship. Based on long-term fieldwork, The Value of Disorder is an original and in-depth account of the area and its Tubu majority inhabitants. Julien Brachet and Judith Scheele examine trans-border connectivity and trade; civil war and rebellion; wealth creation and dispersal; labour and gender relations; and aspirations to moral autonomy in northern Chad from an internal point of view – a point of view that in turn participates in a dynamic process of regional interdependence. Vividly ethnographic, the book gives precedence to local categories of value, while asking broader questions about the nature of non-state regional political organisation. Questions that inform current political developments in the Sahara more widely, and have the potential to challenge key concepts in Saharan studies and the social sciences. 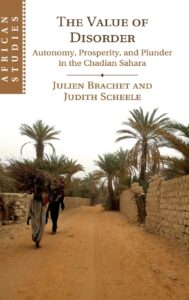